The Story Behind the Shot... 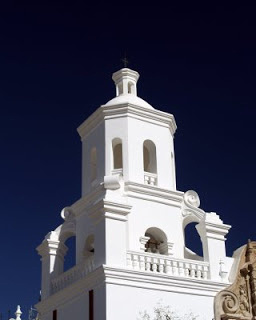 The" White Dove of The Desert" , is San Xavier del Bac Mission, located outside of Tucson, Arizona. My friend Megan and I were driving down to Green Valley to see my friend Donita. She called while we were on the way and told us to make sure we stopped to see the mission. It was amazingly beautiful- and to think that this was built in the late 1700's -without modern technology. We did not stay long, we still had a bit of a drive to go... but I did get some great shots. It was mid day, in late Januarary, and it is a very white building- adds up to a very bright subject! I used a polarizing filter- and I am still learning with it. I didn't really want the background sky- to be almost black, but it turned out nicely. Of the two towers, they don't really know why the second one was never finished. They possibly ran out of money. No one knows for sure. I could have poked around here for hours, but we only had a few minutes. While we were visiting with Donita, she took us a bit further south to another mission. Tumacacori has not been restored. I'll try to get some photos posted soon. While were were in Arizona, we put almost 1700 miles on our poor little rent-a-car. But we both got some very memorable shots of everything from the Red Rocks of Sedona, to the Grand Canyon to the one time Stage Coach station, now turned outdoor biker bar "Grease Wood Flats'. Thank you Megan for a great trip- where are we going next time?!
« Previous Post Next Post »