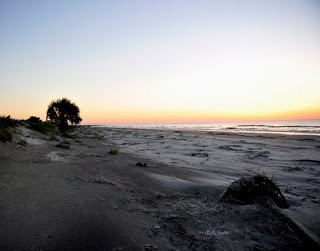 Spring 2011.... I was very fortunate to join Nature Photographer Eric Horan and Naturalist Marvin Bouknight, along with a wonderful group of fellow photographers as we spent memorable weekend on Ossabaw Island, the third largest barrier island located off the Georgia coastline, on the Atlantic Ocean. A short19.5 miles from my front lawn.... but in reality, a million miles away... As cliche' as it sounds.... a weekend that changed my life.. and view of the impact that we humans have made on the earth...

I had someone ask me before I departed, "why are you going over there? there isn't anything out there".... but oh, yes there was... it was jam packed.... teaming with activity... and wildlife. You just have to stand still long enough to see it. Something that we don't remember to do much these days it seems... with email, cellphones, soccer games, dinner, etc... who has time to stand still? and I'll admit, I was on my cell phone allot while I was there, taking phone pics, and uploading them to Facebook for my friends to see what I was experiencing, checking the weather, the satellite map of the island etc... (that's how I know it was 19.5 miles ;)...and I felt soooo guilty about even carrying a cell phone....

Yes, it was life changing to stand on ground and beaches that native peoples stood on 4,000 yeas ago, and get the chance now,to see it pretty much the same as it was then... after it has been through the eras of colonial and ante-bellum plantation owners, and the enslaved African Americans and the tenant farmers, and the 20th century northern families. Most of the island is now back to the way it was before, before the ancient oaks were felled by hand saws to make the great sailing ships, before the dark hands planted and picked the cotton, indigo and other crops. These days, most of the "hands" on the island belong to raccoons, sea turtles and other creatures...

To get to the island, we had to drive across Skidaway Island, a private, gated golf and tennis community that bears little if any resemblance to what it once was- really hit a nerve with me on the return trip home, I was slapped in the face with the way I saw it this time... now I know what it could have looked like before it was massacred and sliced into tiny lots and sold. (I'm very familiar with Skidaway, I worked out there for five years over twenty years ago, and little has changed)

Anyway, we launched from Delegal Marina and settled in for the brief trip to Ossabaw. We were a bit nervous as bad weather was rolling in... the wind was whipping and the tornado warnings were issued. We reached the dock, offloaded and headed to the Club House a refurbished late 1800's hunting cabin, to meet the rest of the group and get settled in. It rained off and on the rest of the afternoon. Several of us would attempt to venture out to do a bit of exploring... and take advantage of the amazing golden lighting brought about due to the storm -only to be sent dashing back to "Base Camp" to get in out of the rain with our camera gear. it was a good way to meet the others and plan the rest of the weekends excursions.

The next morning before sunrise, we met up with Cody the resident DNR officer, and we all crammed into the pickup truck for the bumpy10 mile ride to the beach to catch the sunrise. The road under the the narrow canopy of oak trees, that goes from the North end to the South end of the island was amazing all on its own. It is said that this is probably one of the oldest still in use roads in America- dating back to the 1600's

Due to our getting a lateish start to the day, we missed the sunrise by just a few minutes. We didn't mind too much, we got to explore the "Bone Yard" where the beach is eroding into the sea and the trees along the edge have fallen on to the beach. These made for some amazing back drops and great subjects to photograph. Trust me, you have not traveled, until you go to a barren island with a group of excited photographers. At least WE all understood each others enthusiasm !

By mid morning we were getting a bit tuckered out and headed back to the ClubHouse for a wonderful lunch. Our chefs for the trip were Eric's wife Jan, and her good friend Jill... thank you again ladies for the delightful spreads you put on for us! That evening we all gathered back up and rode out to a few other spots to photograph. The Island was three seperate plantations at one point, and we heded to Middle Place to check out some old buildings. the focal point being the Tower House that was built in the 1970's by a group of artist that were part of the Genisis Project. We caught this barn like building and the river as the sun was setting. That evening we had "Movie night" as we all gathered in the main room of the clubhouse to view and critic some of the photos from the day that the guys projected onto a sheet that was hung on the front of the fire place . this worked out nicely, we got to see how the others "saw" the same things.
Keywords: just off of the Georgia coast, Ossabaw Island
« Previous Post Next Post »